Charlie Sykes on his show this morning talked about Harold Camping, the preacher man who had incorrectly predicted the rapture for last weekend (starting around the 22 minute mark):


"Obviously, there are people out there that are able to convince their followers, who live within their bubble, that they know something.....There are people that believe all sorts of crazy things....If you believe something as a religious matter of faith or ideology, then it doesn't matter what the facts are, it doesn't matter what happened, because you're always going to believe it, you're always going to fit it into your overall theory."

Sykes earlier: "My evidence...absolutely none."
Posted by capper at 9:49 PM 2 comments:

From the esteemed and impeccable Emily Mills (note: the feed reads from bottom up, so the lower entry came first):

“Deep South Fred,” as we on the left fondly call him, has been an unquenchable source of material. So, thirsting for more, I thought it might be fun to pay tribute, sort of. Since life and other stuff tends to get in the way, I have highlighted only those that made an impression upon me during my own five plus years of blogging. Without further ado, I give you … Fred, at his finest.

No tribute to Fred would be fitting without saying something about his blog, and what he claimed it would stand for … Real Debate, hence the name. Unfortunately for Fred, he kept getting in the way of real debate. Way back then, Fred advertised his blog this way:

Too often in today’s political landscape discourse is kept among those who agree. This is not a blog to promote that. We discuss ideas here, we ask that you keep your tone in check and respect those who are willing to share.

This didn’t last long. Fred has never been one to take criticism gently or gracefully. Fred's skin is so thin you can see his organs (missing two, the heart and that gray thing). Nor were his fellow travelers on the right much better. Veiled threats and racist comments the norm. Comments from leftys in opposition to something Fred had posted were often labeled “hate left” or they simply disappeared, especially if the facts portrayed did not fit Fred’s template for what was real. But, that’s not really that unusual for bloggers. Many feel ownership of their blog more strongly than others. It’s just that Fred tends to be more extreme than others.

For example, not too long ago Fred “broke the news” that the Obama campaign was violating Wisconsin election law with a campaign flyer that stated the following:

Fred jumped on that (I know, hard to imagine him lifting himself) and wrote: “Sorry folks, they made that up. Here is a link to the State of Wisconsin Elections Board rules, nowhere does showing up to register with someone to vouch for you come into play. This flyer was paid or (sic) by the Democratic Party so they are obviously complicit in encouraging people to break election law. Why do Democrats keep trying to cheat? Why won’t any of the major media call them on it?

“Can you imagine the outroar if Republicans were passing fraudulent information about Wisconsin election law? Hell, they are after AG Van Hollen for daring to ask the accountability board to follow the freaking law.

The unethical Democratic Party is at it again, and they’ll continue to get away with it until enough people raise hell about this problem.”

Oh man, the horror! Fred had the Dems by the balls and even the nationally known blog, Redstate, leaped into the fray linking to Fred’s post. He was so proud.

Problem was (unfortunately for Fred, and Redstate) none of what he reported was true. In fact, Wisconsin election law stated exactly what was stated on the campaign flyer. Fred just hadn’t looked closely enough.

Most people would have admitted their mea culpa and proffered an apology. Not Fred. Instead, he zapped the post, in the process leaving Redstate with a broken link in their story. Fred has written numerous times about the inability of lefty bloggers to fail to see the hypocrisy. His view tends to be a bit myopic.

More recently, Fred discovered the joys of Twitter. Twitting away mercilessly one day he got caught by Dan Bice of the Milwauykee Journal Sentinel:

“Got my stimulus package in the mail today. It contained watermelon seeds, cornbread mix, and ten coupons to KFC.”

In Fred’s defense, this was not an original tweet. It was from an e-mail that was circulating the Intertubes. However, when called on it by Bice, Fred’s response was legendary.

Bice wrote: In an e-mail today, Dooley said he took the tweet from somebody else and re-posted it on his page. In addition, he said he did all this shortly after having gall bladder the surgery and while he was still under the influence of painkillers and anesthesia.

“In that state I didn’t notice any racial connotations. I’m from the deep south and to me that’s not a racial thing, it is a southern thing. If I had not been under the effects of anesthesia I would have likely noticed that could have been taken the wrong way and would have passed on it.”

Really? I've heard Fred speak. There's not a hint of South in his delivery. He also does the South a disservice by assuming his racial shortcomings are universal down there. Fred did state he would avoid tweeting under the influence in the future. He may be more careful tweeting, but otherwise, he's not kept his word.

There is so much more material available for anyone with the time, or the history in dealing with Fred. By the way, any personal anecdotes are welcome on the comment section.

One last thing from me and then a final sally forth by Mr. Humor, John Foust.

I wrote a post during the presidential election about Bill Ayers. At the same time, Fred was creating a list of lefty bloggers who had failed to write quickly enough about the travails of then Illinois Governor Rod Blagojevich. In jest, I suggested I was upset that I had not been included in the list. Fred corrected that ommission by singling me out for instead writing a “defense” of Ayers.

I pointed out to Fred in an e-mail that the post was in no way a defense of Ayers (I had previously been banned from his site). I wrote that I had been commenting on Ayer’s op-ed in the New York Times. And, I admitted that I agreed with Ayer’s assessment that the guilt-by-association tactics of the right regarding some closer connection with Obama was dishonest. That’s not a defense, its agreement with a point he made. In fact, I further wrote that I was troubled by some of Ayer’s explanations for illegal actions he took.

For Fred, though, this wasn’t enough. His reply was classic Fred.

Yes Tim when you attack those who would dare to bring him up you are defending.

Anyway, in conclusion, here is that quote from John Foust that captures the darkness that is Fred Dooley.

“Too often in today’s political landscape discourse is kept among those who agree. This is not a blog to promote that. We discuss ideas here, we ask that you keep your tone in check and respect those who are willing to share. Entire posts and their comments will be tossed down the memory hole when we really screw up. Hatred and character assassination are heartily approved when they’re directed at anyone who disagrees with me, but I’ll zap anything that points out I’m easily fooled”

cross-posted at The Other Side of My Mouth
Posted by Other Side at 12:07 AM 7 comments:

Journal Sentinel circulation is up slightly, due, the paper says, to the Packers' success and Scott Walker's war on unions. 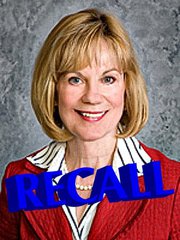 This morning, on the Charlie Sykes Incite show (which was mercifully without Sykes, who was no doubt enjoying some union-won time off), Alberta Darling repeatedly complained about the people's boycott of Johnsonville products, as well as Coors, Angel Soft and all the other companies that chose to support the anti-worker, anti-middle class, and anti-freedom Scott Walker.

Darling repeatedly stated that not buying Wisconsin made products was wrong and told people to buy some Johnsonville brats and Coors beer.

Perhaps some intrepid reporter should ask Darling what she has against buying from local companies.

Klement's also makes very tasty brats which are made right here in Milwaukee and don't have the same taint as the corrupt Johnsonville leaders permeating everything about them and their ties to WMC.

And Coors isn't even made in Wisconsin. It's merged partner, Miller, is still made here, but even then, they moved their headquarters out of Milwaukee County and into Illinois. So why in heavens is she saying that we should buy a beer brewed in Colorado and headquartered in Chicago, even while she's saying how we need to buy locally?

If Darling was really pro-Wisconsin, she would have recommended something like Sprecher, the brewery that is wholly right here in Glendale.

To recap, Alberta Darling, who is supposed to be the state senator for the Milwaukee area, in an effort to bash the working class people of all of Wisconsin, is telling people to buy brats made in Sheboygan and beer brewed in Colorado, instead of supporting local companies.

Is it any wonder why people are finding her to be clueless and in desperate need of  having to leave her office?

And as an extra dose of the cognitive dissonance from the right wing, neocon Fred Dooley, worried about a non-existent plan to sticker up grocery stores, goes out to show them union thugs by shopping at Pick'N'Save, which is a union shop. Thanks for supporting your local union members, Fred!

Cross posted at Cog Dis.
Posted by capper at 8:41 PM No comments: