It's got to be hard to be Charlie Sykes.

McIlheran: In Defense Of Witch Hunts

Professor William Cronon is a history professor at the University of Wisconsin - Madison.  He is also a blogger who wrote an eye-opening piece on how the Koch Brothers and their ilk are funding and controlling this recent assault that we have seen in recent weeks, not only on the working people of Wisconsin, but all across the country.

Within days, the Wisconsin GOP came down like a gang of locust, making a very specific open records request.  It was obvious by their choice of words to search for that their only concern was to throw a wide fishing net in their expedition in hope of finding some stray tidbit that they could conflate and use in an effort to discredit his good name.

Patrick McIlheran, resident GOP spokesman at the Milwaukee Journal Sentinel (motto: Have you unsubscribed yet?) tries a pathetic attempt to justify the GOP's witch hunt (emphasis mine):


Schneider points out something else: The left has freaked, loudly enough to shake some conservatives, because the Wisconsin Republican Party ran a freedom of information request on Cronon's UW e-mail account. Was the professor using the equipment provided by taxpayers to play politics? Inquiring minds are curious, but the left behaves as if to request the records was itself some kind of suppression of the professor's free thought.

The question for McIlheran is this: On what grounds do you suspect that Professor Cronon was using the government's computer to write his blog?

Having some experience myself with what Cronon is currently going through, I have to wonder.

Is it based on some baseless and artificially created "proof" as the right is wont to rely on, since the truth and reality rarely supports their positions?

Or is it because they so often don't do the ethical thing that they naturally presume no one else does either?

Or is Charlie Sykes their director of research?

As McIlerhan would say: Inquiring minds are curious...
Posted by capper at 12:23 AM 1 comment:

Reading Between The Tweets

It appears that there is some love lost in Wingnut Land: 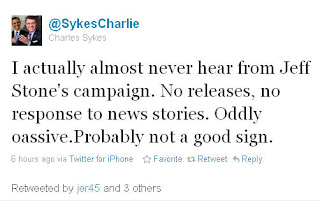 Most people read that as that Charlie Sykes thinks Jeff Stone is dead in the water.  And that's a likely scenario. Stone did himself no great favors by aligning himself hip-to-hip with Scott Walker.  Walker did lose Milwaukee County in November on a 68-32 margin, and that's when Walker had popularity. Stone then continued to bury himself by playing along with Walker's attack on the working people of this state and introducing a bill to keep poor people, minorities and college students from voting.

That's not exactly the prescribed formula on how to win friends and influence people.

But there also may be another explanation for Sykes' tweet.

He could be pining away for his friend, who would rather hang around with ex-cons than with Sykes.  Can't say that I blame Stone for that one either.
Posted by capper at 11:06 PM No comments:

On Friday, there was a debate between David Prosser and JoAnne Kloppenburg, the two candidates for the Wisconsin Supreme Court.  Prosser attacked his opponent by trying to label her with vague titles and offering no reasoning for his name-calling (emphasis mine):


Justice David Prosser went on the attack in a debate Friday, calling his campaign opponent an ideologue trying to mask her true sentiments.

Assistant Attorney General JoAnne Kloppenburg said Prosser was mischaracterizing her and she had never allowed personal views to color her approach to cases in two decades at the Department of Justice.

Prosser said Kloppenburg held "extreme political and social views" but did not specify what they were.

"She's trying to camouflage her views and not level with the people of Wisconsin," Prosser said.

"She is an unbending ideologue. And I wouldn't say that if I hadn't heard that multiple times."

Doesn't seem so extreme to me. If anything, she could be described as rather centrist.

So why would make these wild and baseless accusations? Besides the fact that he is probably not polling very well right now, thanks to his close association with Scott Walker, that is.

Prosser gives us the answer in the part cited above.  It's obvious he listens to too much talk radio and is no longer able to be objective or honest.  Not a good thing for a Supreme Court Justice candidate to have problems with.

That alone should show why Kloppenburg is the much better choice.
Posted by capper at 10:44 PM 1 comment:

They're So Cute When They're All Petulant

Over the past few years a certain subset of bloggers has made the case that money is speech, that there should be no limits on how money is spent to influence politics. The most egregious example of this is the Citizens United decision.

But, now that real people are using their own money to influence politics in the only way they can compete those very same bloggers are shocked, shocked to find out that money is a sword that cuts both ways.

Here is the legacy of Jim Haney at WMC; he sowed the seeds for a business climate in Wisconsin that pitted employers against workers. Now Kwik Trip, Johnsonville and Sargento are reaping the fruit of those vines and the perpetually aggrieved are squealing about it.

Here's a piece of advice for the next time AFP buys a political movement; you might consider the consequences of naming it after the best known boycott in American history. The real patriots of the real Boston Tea Party knew that consumers have choices that can change the system. Thanks to the Koch brothers and Jim Haney Wisconsin companies will have to deal with the fallout from that.
Posted by grumps at 6:11 AM No comments:

This item will no doubt get the same prominent display in the print edition as the recent story about the salaries of national union leaders:

The Message Isn't The Problem

For the past week or so, Charlie Sykes and some of his trained parrots have been going on about how Scott Walker and the Republicans are doing such a wonderful thing by stripping people of their rights.

Sykes also said that Walker's biggest problem is that he just isn't "messaging" very well and people just don't recognize that their impending fiscal doom is going to be the best thing that happened to them.

But Walker's problem isn't the message he's trying to feed us.

Walker's problem is that there just simply isn't enough lipstick for that pig.  And now that he has awoken and revitalized the sleeping giant of the middle class and the unions, he has bigger problems to worry about.

Such as if he can ever make an appearance without having his supporters outnumbered 10:1.
Posted by capper at 11:34 PM 2 comments:

Here's an idea for a great Republican campaign event.
Make it a joint event between state Senator Randy "Bed" Hopper, who will be defending his seat in a recall election (if he's not in legal trouble for not living in his district) and Justice David "Blue Law" Prosser, the WMC candidate for the Wisconsin State Supreme Court.
Special guest would be Newt Gingrich.
The host would have to be of course, Charlie "Liz Woodhouse" Sykes.
And it would all be sponsored by the Koch subsidiary "Grandsons of Taking Liberties."
Even I'd pack a lunch for that Rumble Royale.
Posted by capper at 10:56 PM 3 comments:

Sykes Condemns Catholics' And His Own Behavior

Last Friday, Jeff Wagner started whining about people exercising their rights in a free market society by opting not to spend their hard earned cash on stores that don't support their personal values.

On Monday morning, Sykes continued the tirade, bemoaning "union thug tactics," by which he meant those union members that they don't appreciate their anti-Wisconsin attitudes.

Gee, it's almost like the squawkers are trying to pick which businesses are winners and which are losers. And we know how bad that is, because they kept telling us that until Scott Walker started doing the very same thing.

But the burning question is, when will Sykes apologize for teaming up with the Catholics and using the same "thug tactics" that he condemned today.
Posted by capper at 1:22 AM 4 comments:

Posted by capper at 9:03 PM No comments:

If you're not acquainted with the Scatt Walker page on Facebook, you should be. Here's today's gem from the guv's alter ego:

Just told my staff, "We need to start *winning*. Call that freak-job loud-mouth Charlie guy for some advice. He's bat-shit-crazy, but may have some ideas."

In case you were lucky enough to miss it on Thursday morning, Charlie Sykes spent at least the first hour or so of his radio trying to show that he really isn't a sniveling coward.

He told of how he bravely put on a suit, with a blue tie even, and drove out to the Capitol Building.

Of course, once there, he goes straight to Koch Brother Media, aka MacGuyver Institute, and got a camera man to walk him across the busy street.

Sykes then shares how heroic he was by walking up to the door and going inside!  No word if it was one of the public doors or through one of the tunnels that Walker uses so smuggle in supporters.

He then shares how he disappointed he was that none of the protesters ran up and started yelling at him.  What a champion!  Of course, his self-imposed mission was made all the easier since he went after the Weasel King, Scott Walker, locked the People's House up to keep it away from the people and the working stiffs that have appeared at the Capitol for every day without incident.

The best part though comes after he is let inside.

He actually admits to going up to some of the protesters with the sole purpose of trying to instigate an incident.  The protesters not only refuse to rise to his adolescent taunts, but don't even know or care who is is.

It's nice to see that he is getting exactly the respect he deserves: none.

Fox News Can Tell Your Future By Reading Your Palms

Bill O'Really? and Faux News reporter Mike Tobin have one the idiots of the week award with this smashing report about the "violent" riots going on in Madison for the past couple of weeks:

Maybe the state of Wisconsin can save some money by not shipping in those palm trees, eh?

Any bets that Tobin's allegations of getting hit was fraudulent as well?
Posted by capper at 12:40 AM 1 comment: