A full six months ago, I told the gentle reader about how two Milwaukee radio stations, WTMJ-AM and WISN-AM, were in violation of federal laws - namely, the Zapple Doctrine.

The Zapple Doctrine states that radio stations need to provide equal time to political candidates in the 60 day period leading up to an election.

During that 60 day period leading up to the recall election, yours truly, as well as many others, monitored the air waves. When we saw that they were violating this law, we sent emails to the general managers of each station asking them to start following the laws.

The outcomes were as one might expect from the corporate media, and were outlined in a press release from the Media Action Center, represented by Randy Bryce:


MAC said it conducted a comprehensive study in May/June of 2012 – during the Scott Walker recall campaign – which clearly showed the two stations each gave supporters of Gov. Walker and the GOP about 80 minutes of free airtime daily on their local talk radio shows, while refusing any access to supporters of Mayor Tom Barrett and Democrats whatsoever.

In total, the two stations subsidized the Walker campaign with an estimated $1 million dollars in airtime. The study documents that WISN and WTMJ hosts and guests not only exclusively promoted GOP candidates, but actively recruited volunteers for GOP campaigns over the publicly-owned airwaves, while refusing to provide any free airtime for the other side.

This, the challenge asserts, amounts to private censorship, which violates the First Amendment rights of those in the community who are denied access to the scarce publicly owned airwaves during campaigns. It further states the stations willfully have violated existing FCC rules about comparable time, citing legal opinions from the Wisconsin Broadcasters' Association.

"Broadcast stations have a unique duty to serve the entire public, especially during campaigns," explains MAC director Sue Wilson. "When a radio station uses its giant microphones to cheerlead for candidates of only one political party, no matter which political party it may be, it violates the First Amendment rights and public trust of the entire community.

"The behavior of WISN and WTMJ shows clear political intent, which violates FCC rules, as well as a lack of character to hold a broadcasting license. The FCC must not renew those licenses and should award them to new operators," Wilson said.

The FCC must rule on these challenges by December 1.

Erik Gunn, writing for Milwaukee Magazine, finds the approach novel, but does not think they have much chance for success, given that the FCC is pretty much toothless now.

The right wing response was the usual conflation, claiming that the eeeeeeeevvvvvvvullllll liberals were trying to squelch the voice of the right wing squawkers.

While they're trying to get people to drink the poisoned Kool Ade, they are afraid the voice of reason will drown them out.

Cross posted at Cog Dis.
Posted by capper at 10:20 PM No comments:

A half mile from the downtown headquarters of Journal Sentinel Communications and plugged into various Intertube outlets, U.S. Department of Energy and industry partners have tapped what could potentially be a boon for energy production.

Two years ago, it can now be told, these partners kidnapped two lesser known conservative talk radio show hosts, Charlie Sykes and Jeff Wagner. They were first rendered unconscious. Then drills were inserted into their anuses in search of methane hydrate, which looks like ice but burns like a candle if a match or another heat source warms its molecules.  Large reserves were found.

There is little need now for methane, the main ingredient of natural gas. With the boom in production from hydraulic fracturing - otherwise known as fracking - the United States is awash in natural gas for the near future and is considering exporting it, but the DOE wanted to be ready with methane if there's a need.  "If you wait until you need it, and then you have 20 years of research to do, that's not a good plan," said a technology manager for methane hydrates within the DOE's National Energy Technology Laboratory.

Conservative talk show host methane comes from buried organic matter deep inside the colon. The gas migrates upward, under high pressure and low temperature, until it reaches the chests of the selected mouthbreathers and combines with frozen water surrounding their cold, cold hearts to form methane hydrate.

Unfortunately, there are consequences to mining. The shallower the talk show host the more the threat of release of potent greenhouse gas into the atmosphere, exacerbating climate warming (or not).  Another, safer method of extracting methane is by increasing temperature.

It was theorized that attaching tinfoil caps to the heads of talk show hosts, linking them with copper wiring and connecting them to banks of networked computers would provide enough heated rhetoric to melt the gas.  This was tried with Sykes and Wagner. They were also given a script containing talking points and faux outrage. Initial tests during simulated regular broadcast hours produced very little gas. The temperatures inside the body cavities did rise, but breaks for advertisements and breaking news caused a subsequent drop in temperature as the talk show hosts sipped water and shuffled paper as they waited for the next segment.

The Republican primaries provided an answer.

The end of the presidential election was the final key, or as one engineer put it, "The handwringing, denial and vicious blame game over Mitt Romney's election defeat has provided us with an almost unlimited flow of heated rhetoric."

Plans are underway to kidnap Christian evangelical leaders and f*ck them. Other large sources of methane hydrate are also predicted to exist within Rush Limbaugh and Karl Rove. Unfortunately, it's been difficult to get anyone close to them as they are expertly shielded from reality.


Parody of article that appeared in Washington Post.
Posted by Other Side at 5:19 AM 3 comments:

Sykes Writes, No One Cares

Just look at how popular he is at a book event in Madison, courtesy of Scot Ross: 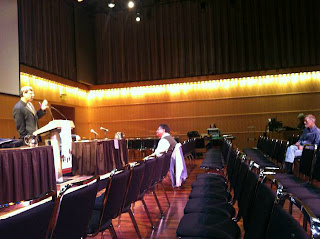 Y'know, maybe that is a typo.  It looks more like Sykes is a Putz Prize Nominee.

Also, any bets that one of those two people is his producer and the other one is someone he paid to be there?


But in one misguided sense, who could blame them? Anyone who regularly watched Fox News, listened to AM talk radio or read the hot house conservative media for the last four years must have been convinced Obama's 2008 victory was a massive mistake and that it was only a matter of time before voters corrected their blunder.

That's been the wayward message for nearly 48 months: America was anxious to right the Obama wrong and when given the opportunity on November 6, there would be a Republican stampede.

Turns out viewing politics through the filter of hate severely limits your vision.

Posted by capper at 3:01 AM No comments:

Faux News really outdid themselves with the coverage of the election on Tuesday night.

The aftermath is revealing a lot about this "fair and balanced" news services.


Shortly before 5 p.m. yesterday, Fox News chairman and CEO Roger Ailes assembled his network's election team in a second floor conference room at Fox’s midtown headquarters to discuss the night’s coverage. He prepared them for the worst. “Guys," he told them according to a source familiar with the exchange, "if things don’t go your way tonight, don’t go out there looking like someone ran over your dog."

Then there was the already infamous meltdown by Karl Rove, who just couldn't accept the fact that all the money that he and his uber-wealthy friends spent to buy this election was for naught.

Oh, then there is the revelation on how they pull in so many white conservative viewers:


With neither side backing down, senior producers had to find a way to split the difference. One idea was for two members of the decision team, Mishkin and Fox's digital politics editor Chris Stirewalt, to go on camera with Megyn Kelly and Bret Baier to squelch the doubts over the call. But then it was decided that Kelly would walk through the office and interview the decision team in the conference room. “This is Fox News,” an insider said, “so anytime there’s a chance to show off Megyn Kelly’s legs they’ll go for it.” The decision desk were given a three-minute warning that Kelly would be showing up.

By the way, Rove, whose SuperPAC spent $300 million on the election, never did make an apology for his tantrum or vile accusations.

And Faux News has never explained how having someone who spent so much money to buy an election contributes to their "fair and balanced" news coverage.
Posted by capper at 2:57 AM No comments:

If you thought that Faux News reahed the apex of asininity when they tried to tell the county that palm trees grew in Madison, Wisconsin in the middle of winter, think again.

Now they are complaining that people are raising money to help the survivors of Hurricane Sandy:

I can't wait until tomorrow when they complain that Osama bin Laden didn't get his day in court before being executed.

How low can these vulgar beasts go?

H/T Jeff Simpson
Posted by capper at 5:11 PM No comments: