The Milwaukee Journal Sentinel, part of the largest corporate media blocs in the state, is, oh so proud of their PolitiFact, even though it misses more than it hits.

But I don't know what good it does anyone, since it is so skewed so often.

Take for instance, the issue of how many recall signatures were turned in.

The recallers claimed that it was more than one million signatures.  The GAB said that the actual number was 931,042.  That would mean that the recallers were off by a 7%.  For this, PolitiFarce gave them a "false" rating.

And that's it.  They didn't check out any other single claim that was flying around out there regarding the recalls.

For if they had, they might have found that the MacIver (Anything but a) News Service and the teahadists that were hosting the "Verify the Recall' McCarthyism revival were lying through their teeth when they claimed that a third of the signatures were invalid.  In reality, it was about one thirtieth.

If they had look further, they might have heard Charlie Sykes echoing these ridiculous claims.  They could have given him yet another "Pants on Fire" rating to go with his collection. (And it's not lost on me that Sykes has never been found to be telling the truth.)

If they looked even minimally, they would have found Sykes' pal, Jeff Wagner, who predicted the final number would be around 600,000 and sometimes predicted that the recall would fail outright.  Wagner was off by almost 50%, but he doesn't even warrant a mention.

They could have looked at Vicki McKenna and the Koch-sponsored Wisconsin Reporter who claimed that someone forged her name on a recall petition.  Yet according to their own Verify the Recall database, neither her professional name or her real name appear.  That would put them at 100% off.  But PolitiFarce won't even give them a smoldering ember much less a pants on fire.

The excuse that it was too hard to look around doesn't hold water either.  They could have just looked at their own bloody paper and found that they were off by five times the actual number of invalid signatures.  Maybe they could torch their own pants?

But since PolitiFarce chose not to look at the other side of the guessing game, I'll give them a rating:  Corporate Media: 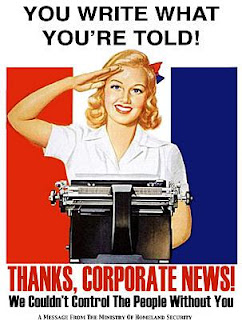 Charlie Sykes, the mouthpiece for WISGOP, just ended a tirade against his favorite Republican presidential candidate, Rick Santorum.  Santorum earned the wrath of Sykes because he said that as president, he would ban pornography.

Sykes stated that he thought the move was wrong, yelling things like:

This is the same Sykes that didn't have a problem with the GOP-controlled state legislature invading women uteri and telling them that they don't have a right to decide what happens to their own bodies.

I really can't tell which is more outrageous, his hypocrisy or his misogyny.
Posted by capper at 11:58 AM 3 comments:

The afternoon Solidarity Sing Along on 3/15/2012 was invaded by students from a Sheboygan High School that chanted Stand with Walker.

Can you imagine what the WTMJ Republican radio talkers would have to say if the kids had decided to sing along? Brainwashed by left-wing, union goon teachers, no doubt.

Presumably they are in Madtown for the state basketball tournament, not on a class trip. That would be wrong, right?

Last week, one of the most acerbic of the right wing's heroes, Andrew Breitbart died.

Breitbart was not a nice person.  Some of his claims to infamy included selectively editing videotape in order to defame Shirley Sherrod, saying "F%*$ you!" to union leaders, and telling Wisconsinites to got to hell because they wanted freedom and equality.

Sadly predictable, when Breitbart died, some people let loose a stream at vitriol as one last shot at the memory of this caustic person.

Even more sadly predictable, the hypocritical Charlie Sykes has tried to make hay out of this.

Actually, for Sykes to try to make something out of this is doubly hypocritical.

First of all, should anyone really expect Breitbart to be granted respect when he wouldn't show any respect when the late Senator Ten Kennedy passed away?

Secondly, Sykes should be keeping his mouth shut about anyone's comments when he has yet to even apologize for inferring that Milwaukee County Executive Chris Abele is a pedophile.
Posted by capper at 6:32 PM 1 comment:

About ten days ago, we reported about how Charlie Sykes went beyond the pale and made the inference that Milwaukee County Executive Chris Abele was a pedophile.

This was brought to the attention of Abele's office and to the Democratic Party.

The Democratic Party took this offense seriously and sent a letter to Steve Wexler, Executive Vice President of the Journal Broadcast Group. In the letter, their outrage at this libel was expressed as well as giving that Sykes receive some sort of punishment, such as suspension or termination, for his vulgarity.

Wexler responded back in an unfortunate, but entirely predictable, manner:


Thank you for sharing your concern with me about a "tweet" by Charlie Sykes that you felt was inappropriate.

I've reviewed your letter and don't agree with your conclusion.

By the way, I am well aware of John Mercure's background, since he has worked for our stations for years, both on TV and as host of our afternoon radio news program.

Sykes addressed this on his radio show. Or more appropriately, danced all around this issue. But even when asked directly what he meant by that tweet, Sykes refused to answer the question.

We cant' expect Sykes, or WTMJ's management, to do the proper thing on their own. They don't have the integrity or the honor to do so.

Perhaps it's time to take the same action that has Rush Limbaugh and Clear Channel sweating like the pigs they are. The only way to get their attention and get them to do the right thing is to go after the only thing they care about, their money.

I think it also may be time to drop a line to Sue Wilson and the Media Action Center.
Posted by capper at 6:11 PM No comments: