Could This Ad Be Any More Offensive?

Charlie Sykes is constantly trying to find the least bit of trivia against any Democrat acting or speaking poorly as a warped way of justify his own poor behaviors or the poor behaviors of his Republican controllers.

One of is favorite shticks is to find someone calling a Republican a name, like "Poopyhead," and acting in feigned outrage and shock as such horrible manners. Going on about "the new tone" and mocking the desire for civility. Makes one wonder exactly where is head is at if the thinks he even has a moral leg to stand on regarding anything.

One thing you won't hear Charlie squawking about is the deplorable ad from a right wing attack group in California against Janice Hahn, who is running for Congress there.

Here is the ad in question, although I am loathe to even give it space here, but it so low and so vulgar, the right's attitude towards minorities and women have to be brought to light so that we can understand how sick and how degenerate they are. I repeat, this ad is NSFW:

Like I said, you won't hear Charlie say a peep about this. Not that he is afraid to bring it up, but just that he doesn't care. For that matter, I haven't seen any other conservative call them out on this either.
Posted by capper at 5:05 PM 2 comments:

WMC Watch led a march to the offices of WMC today to protest the miserable things that they and their purchases (Republican legislators and Scott Walker) are doing to our state.

The boyzzz at MacGuyver Institute, putting that Koch money to good use, tried to sway public opinion by presenting a misleading video and tweeting it (they must be getting tired of always issuing press releases):

Why, those rotten thug protesters!

Wait! What?! There was no damage? Just some chalk drawing?

Unless someone could explain to me how an honest person could ever take them seriously...
Posted by capper at 6:29 PM No comments:

Patrick McIlheran, the rabid small government advocate, has taken himself a government job:


Patrick McIlheran, a columnist for the Journal Sentinel's op-ed page since 2004, is leaving the newspaper this week to take a job with Republican Sen. Ron Johnson's staff.

McIlheran, who will work out of Johnson's Washington, D.C., office, will research issues and write about them for the senator. McIlheran also will work for the Subcommittee on Oversight of Government Management, the Federal Workforce, and the District of Columbia, of which Johnson is the ranking member.

It also proves the old adage of rats leaving a sinking ship.

I reckon that the first bit of research that old Paddy will need to do is show that sunspots are really the cause of all the world's ills.

But this leads to an interesting question: Who will the Milwaukee Journal Sentinel hire to become their new propagandist?

The most logical answer would be Rick Esenberg, who already is a frequent columnist for the paper, and their  go to guy for legal spin.

But like I said, that would be logical, so it's not going to happen.

So who do you think it will be? One of the Badger Blogger Boyzzz? Daddio? Maybe Peter DiGaudio?

Give your guesses in the comments.
Posted by capper at 5:48 PM No comments: 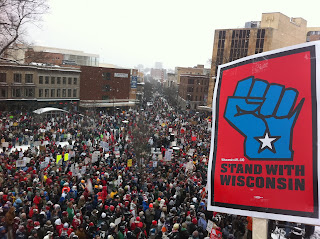 On Wednesday, I heard Jeff Wagner, afternoon squawker on WTMJ 620, having a hissy fit about a group of people that gather inside the Capitol every weekday at noon for an hour of singing songs about solidarity, unions and general support for the working men and women of the state. ( @SolidaritySings for the Twitterati.) This was dutifully parroted by the right wing echo chamber.

They were just so upset because people dare to exercise their first amendment rights and show solidarity! If they are intimidated by such a small thing as this, they must truly be in a panic and know they are quite in the wrong in their ceaseless assault on Wisconsin and the good men, women and children who are its citizens.

But the right's selective and hyperbolic outrage doesn't end there.

On Thursday, both Charlie Sykes and Wagner were mewling about the return of #walkerville. The common mewl was do demonize and de-humanize the protesters who will be coming out for the return of the sleep ins, or in this case, the sleep outs.

What these faux complaints really are is just an effort to minimize the damage that will be done to their side when the people continuously see tens of thousands of people standing together in solidarity against the forces that are trying to remove their freedoms and everything that true Wisconsinites hold dear.

Unfortunately, Tuesday evening, a handful of young hot heads gave the right wing squawkers and their unquestioning followers something they can use to beat the rest of the protesters with. The behavior of these is most unfortunate and not acceptable by any stretch of the imagination. They have not accomplished anything but to give themselves and the other pro-democracy people a big black eye.

But in the grand scheme of things, really how bad were their behaviors? They were yelling and causing a disruption during a late night hearing of the Joint Finance Committee. Yes, it was uncalled for. Yes, it was in poor taste and not holding with the decorum of a governmental body in action. Yes, it went against everything that the other protesters rightfully pride themselves on, which was having peaceful protests and events.

The supposed horror of people doing a sing-a-long or having a jamboree or even yelling "Shame!" in a crowded committee room pales even further when one considers the way the right wing nut jobs express their displeasure. There is really no way that anyone of either side can condone in way, shape or form the act of throwing a Molotov cocktail at a private citizen's home, just because she protested a local store that advocated (with tongue firmly in cheek, one would hope) shooting people because of their nationality.

I can personally say that if given a choice, I'd rather have some young person yelling at me than to have someone jeopardize my home and my very life.

And if you look at what made these young goofs so upset that they were willing to throw away common courtesy and decorum, their "outrageous" behavior seems rather constrained.

The last time someone tried to take away our rights, make us pay higher and higher taxes to benefit a handful of already obscenely rich people and treat us like serfs, we had a little thing called the American Revolution.

All in all, I would daresay that a sing-a-long, even if it was off key, is a mild event compared to what our founding forefathers would have done. Instead of complaining, the Republicans should be grateful that they aren't getting what they deserve.

Cross Posted at Cog Dis.
Posted by capper at 2:45 AM No comments: