*Sniff, Sniff*. Do You Smell Smoke?

The other day, we pointed the gentle reader to Illy-T's* play by play as Patrick McIlheran gets victimized in a flame war with the second in command of the news room, George Stanley.  The flaming of McIlheran was about a German study claiming that BPA was safe.

Looks like the ensuing lull was not a cease fire, but merely Stanley loading up the big flamethrower:


Four authors of a new report concluding that bisphenol A is safe have ties to companies and groups that benefit from the controversial chemical.

The report was written by the Advisory Committee to the German Society for Toxicology, the country's national association of toxicologists.

Poor Paddy won't be able to sit for a week the way his ass is getting burned.

*Illy-T's coverage was so masterful, even the real media noticed it.
Posted by capper at 10:16 PM 1 comment:

It's Hard To Be A Conservative: Part One Gazillion

They are expending considerable amounts of time and energy and selective outrage day in and day out to convince people that it is an outrage to spend a couple of millions of dollars to ensure the integrity of the voting process.

At the same time, Sykes and friends will have to explain why it's a good idea to spend even more than the recount to ensure that whole sections of the populace have their voting rights impeded and to ensure the loss of integrity of the voting process.

It truly is a wonder how they can still look at themselves in the mirror.
Posted by capper at 12:41 AM 1 comment:

McIlheran's Pants Are On Fire

No, not in the PolitiFact sense of the term. That's left for Charlie Sykes.

McIlhernan's burning sensation is the one that comes from having a senior editor of your newspaper publicly slap you down.

The source of this and some other fun observations would be the Illusory One.
Posted by capper at 12:39 AM 5 comments: 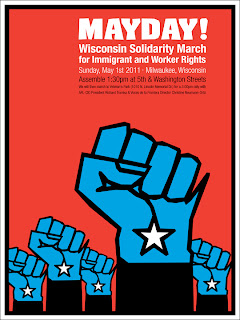 The Biggest Shtick In The State

Monday morning, Charlie Sykes spent part of his squawk show trying to take credit for the Prosser "mandate" of a victory. (Note to Charlie: 0.49% is far from a mandate. It's more like a mistake.)

Illy-T does the yeoman's work of breaking down just what influence Sykes might have had on the race:


What is sad, though, is Sykes's mincing triumphalism, because what he doesn't tell you is that if his special theory has validity, then the dissembling shouter managed to impede Justice Prosser's progress in almost every single one of the Wisconsin counties he mentions, by:

That's how much Prosser conceded, between the general election on April 5 and the primary election on February 15, which is when Sykes commenced his 50K-watt campaign of ludicrous propagandas

Can you imagine that? If the election was even just a week longer, Sykes might have managed to give the race to JoAnne Kloppenburg.

Sykes' delusions of grandeur isn't anything new though.  When she was still an overt political player, Jessica McBride had the same syndrome.
Posted by capper at 6:12 AM No comments:

Vicki McKenna loves to attack working men and women by referring to anyone who stands up for democracy or for basic rights as "union thugs."  It has become the favorite bogeyman of the right wing squawking class.

Of course, the rest of us know that there is not one grain of truth in it, since tens of thousands of people can show up to make their voices heard and not one person gets arrested.

However, the same can't be said for squawk radio hosts.  For example, there is the infamous ticket given to Charlie "Light my fuse" Sykes.  But it turns out, he's not the only scofflaw on the Wisconsin airwaves.

There is also Vicki Pyzysnki, or as you may know her, Vicki McKenna.  It appears that Ms. McKenna was arrested and charged with two counts of disorderly conduct for being "verbally and physically combative" at a Badgers game at Camp Randall.  Reports indicate that she also resisted arrest. Yes, alcohol was involved.

The charges were eventually dropped due to deferred prosecution.

Perhaps the most interesting thing though is this part of the story of her arrest:


The booking record noted her tattoos: ``Wolf on back, snake on chest.''

Source of picture: Sly
Posted by capper at 3:21 PM 7 comments:

Just What Did Happen To The Republicans? (NSFW) 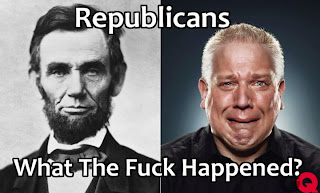 Posted by capper at 9:24 PM No comments:

Last week, Charlie Sykes made a brash statement trying to play up the controversial election for the Supreme Court.  He claimed that:


"They put in as much money as they will ever be able to. They will never again, in Wisconsin, be able to mobilize a 3-to-1 money advantage."

On Sunday, PolitiFact decided to take a look at those claims. Unsurprisingly, they found him to be a flat out liar* and gave him the woeful "Pants on Fire" rating, his second one.**

Needless to say, the sniveling Sykes got his undies in a bundle about being burned again. He's been ranting for two days now, including attacking the PolitiFact reporters not just once, but twice.

In the first launch, aided by his fellow Bradley Foundation beneficiary, Christian "Atomic Pantload" Schneider, is all in a tither that PolitiFact didn't offer enough proof.  They do this in spite of the fact that while PolitiFact actually cites their sources, Sykes' source was an "unidentified 'political observer'" who Sykes also identified as being pro-Prosser.  When given a chance to be clearer on his source(s) of information, Sykes refused to respond.

In his second attack, Sykes then pulled the classic conservative ploy of moving the goal posts. Instead of whining about the sources of information, since the reporters had many and Sykes none, he chooses instead to attack on a whole different subject.  Instead of talking about Sykes' provably-false statement, Sykes chose to whine and tantrum about whether they ever look at other talk show hosts.  Apparently, Sykes is an adherent to the phrase "if you can't dazzle them with brilliance, then baffle them with bullshit."

What it boils down to his Sykes got caught with his burning pants down around his ankles. When he was asked to support his BS claims, he should have just told the truth like he did the first time:

*He was also lying about the supposed imminent end to the unions.

**It amazes me that even though his pants have been on fire twice now, none of the crap he puts in his hair has caught flame.
Posted by capper at 1:21 AM 1 comment: