Last week, Charlie Sykes again took things beyond the pale with one of the most irresponsible tweets anyone has ever tweeted:

For those that aren't aware of the significance of this, John Mercure is the late afternoon squawker on WTMJ radio.  Before he became a squawker, he was a "reporter" for TMJ's TV station and was known for sensationalizing stories and specializing in child sexual predators.*  He was also well know for taking things too far himself.

The question is: What is Sykes' intent with this post?

If he was serious, he might have opened himself and Journal Communications up to a large slander lawsuit.  Even though Milwaukee County Executive Chris Abele is a public figure, and thus open to getting slammed more than a private citizen, the law does put limitations on what a person can say about them.  Accusations and inferences of being a child sexual predator goes a long way over the line.

If Sykes was "just kidding," it shows what a sick little man he is that he considers pedophilia to be something joked about.

Now, I am no fan of Abele's, and I have often offered up criticism of his Walkeresque approach to leading the county and his attempts to turn Milwaukee County into a plutocracy for himself and his rich friends, but this inference by Sykes goes beyond the pale.

Sykes needs to offer a public apology and his employer better look at if they need to take further actions to protect themselves from this liability.

*Even though Mercure styled himself as a crime-fighting reporter worried about kids' safety, he won't even talk about Brian Pierick, the Walker crony who has been charged with child enticement.
Posted by capper at 4:55 PM 1 comment:

PolitiFact's Two-For-One And Why Is Sykes Still On The Air?


Facing a near-certain recall election, Walker that day used his Twitter account to highlight the story as a failure of the previous administration, that of Democrat Jim Doyle. (Other tweets included the fact he stopped for ham and rolls after church.)

In other words, the poor performing program was created under Doyle. And that’s where the blame should fall, Walker says.

Did Doyle approve the plan?

The legislation creating the program was introduced in 1997 and passed and signed into law the following year -- not by Democrat Doyle, but by then-Gov. Tommy Thompson, a fellow Republican now running for a U.S. Senate vacancy.

Doyle didn’t take office until 2003, five years after the CAPCO bill was signed.

Indeed, the proposal had bipartisan support. It was authored by Democratic state Sen. Gwen Moore, now a congresswoman from Milwaukee. Among the 89 members of the state Assembly who voted in favor of the bill March 25, 1998: Walker himself.

But the go on to write how Charlie Sykes, Milwaukee radio squawker, took this from Walker and ran with it, even though he knew it to be false:


Walker’s tweet gained a broader audience the following day. WTMJ radio talk show host Charlie Sykes picked up on the topic and in a three minute segment linked Doyle to the CAPCO program five times. He called it "a Jim Doyle idea," and said the program was "one of Jim Doyle’s signature venture capital bills."

In an email, Sykes acknowledged that the program was created under Thompson. And he pointed out that Walker had tweeted on the subject the day before.

Sykes whined about it on the radio and sniveled about it on his blog, but not once did he even come close to apologizing for misleading his listeners or bothering to correct his lie. If anything, he doubles down on his dishonesty by mewling that Doyle wasn't mentioned enough in the original article, even though he just acknowledged it had nothing to do with Doyle.

Why Sykes is still on the air despite openly lying about things, and admitting he is lying, is simply beyond me. But it goes to show why a person can't believe anything that comes from corporate media shills like Sykes.

Posted by capper at 3:03 PM No comments:

Something Else Sykes Won't Be Talking About

Last week, Charlie Sykes was so excited you could hear the spittle hitting the microphone as he squawked about Mike Tate, head of the Democratic Party of Wisconsin going to Chicago to talk to someone about something or other.  He was going on and on about dirty Chicago politics and the such.

I highly doubt that he's gonna be squawking about that now that Walker has hired two attorneys as he gets ready to meet with John Doe investigators.  One of Walker's attorneys is from Chicago and the other's father made his name representing mob boss Frank Balistrieri.

Sykes probably also won't talk about how he's named in one of the criminal complaints stemming from Walkergate.

He'll probably just do what he's done every day for the past two weeks: Whine about DA John Chisolm and about yours truly.
Posted by capper at 10:59 PM 2 comments:

Rush Limbaugh, while at the Superbowl Sunday night, was caught in action as he prepared for his show: 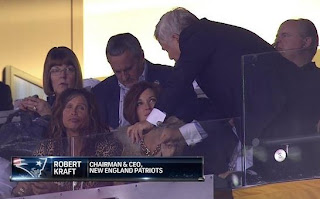