Mark Belling, bellicose bellower, has questioned the autopsy findings of Dr. Mays, and has brought even further unnecessary pain and anguish to the late doctor's grieving family.

Readers have alerted me that he continues his haranguing of the family, even though the autopsy was independently proven to be accurate.

Belling's harassment continues despite the fact that Conley Publishing Group, the media company that carries his columns, felt compelled to issue a retraction and an apology for his blatantly false statements and accusations: 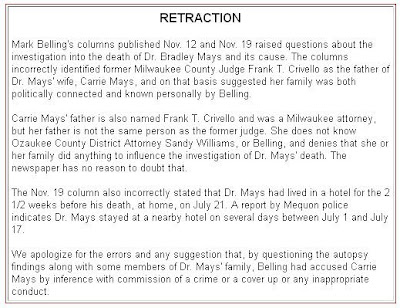 Belling's source for his conspiracy theory appears to be the doctor's brother, who to put it kindly, has several issues of his own, as Michael Horne reports at Milwaukee World.

If Belling had any sense of class, he would offer an apology personally. A word of advice: Don't hold your breath for that to happen.

And if he doesn't issue a sincere apology, then WISN and Conley Publishing needs to finally sever their ties to him, lest he sullies their reputations even further.
Posted by capper at 3:43 PM