On The Consistency Of Thought And Deed 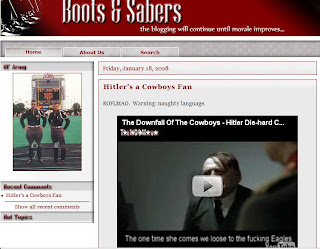 Owen has his knickers in a twist over this Internet meme being turned now to poke fun at the lame-duck Governor of a Northern state. The caption generator has been around for a while and has been used with all sorts of brunts.

But now, he's all upset that someone has captioned it to make fun of the Quitting Governor and he just doesn't like it. Not one boot-stamping, jodhpur-flapping bit. I mean, what kind of a lowlife would turn to subtitling an outake from a Hollywood film to make a joke linking someone to Hitler? Oh, that's right. It was Owen back in January of 2008.
Then it was funny. Now it's an outrage.
Speaking of outrageous, from what paragon did Owen get the tip to the Hitler Ha-Ha? Guess before you peek.
Posted by grumps at 7:16 AM