Chris Abele has the Republicans terrified.

Abele is a left leaning candidate for Milwaukee County Executive, who also happens to be just a bit richer than the Vatican.

Despite the fact that Abele has been blundering his way through the early stages of the campaign, he has a good chance of surviving the primary on February 15th just due to the fact that he is rich enough that he can drown the airwaves with his commercials, in which he never really does say much to hang his hat on.

Abele is a bit of an enigma in the sense that no one really knows what he is about.  He is very elusive with giving straight answers to anything, instead only offering up populist rhetoric. The few things that he has made any sort of statement on has been on the right side of the issue, such as delaying the reconstruction park so that his fellow multimillionaire Michael Cudahy can throw out some wild idea of trying to cram an entire historical museum, a parking lot and a few businesses in that small area.  (Of course, Cudahy always to fail that his high end restaurant is located right there and having even more attractions would be a boon for him)

Anyway, the Republicans must have done a private poll and were terrified of the results.  As a result, they have their lead attack dog, Charlie "No Proof" Sykes come out with the "breaking news" that Abele is a liberal!  Of course, the fact that he has donated to liberal causes and liberal candidates for most of his life in Milwaukee is irrelevant, because it's much more melodramatic if Chucklehead calls it "breaking news," and an exposure of some deep down secret.

Of course, when High Priest Sykes squawks to the masses about a threat to their lord and savior, The Almighty Dollar, the chorus of the echo chamber sounded off in their usual unthinking parrot manner.

SIDE NOTE: Two goofs at Badger Blogger actually wrote two separate posts for the same thing (so much for independent thought!).  But you can't really blame them if they don't read their own site. No one else does either.

There are two things that are rather humorous about the right wingers' panic attack.

One is that Abele's campaign co-chair, who is coming in fresh off the campaign trail after working closely with Ron Johnson's campaign.  Just a wee bit of dissonance there, eh?

The other is when Sykes retweets one of Abele's tweets: 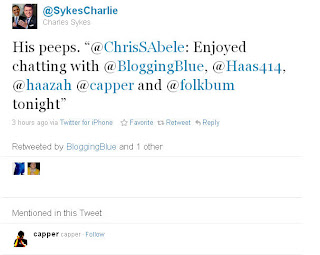 Well, let's see.  Jay, Zach and I had come out to show our support for our friend, Jason Haas, who is running to fill Chris Larson's old seat on the Milwaukee County Board, when Abele and one of his staffers came walking in the door to schmooze around for support.  I can't say it got him very far.

I don't think that Zach or Jason (who got listed twice in the tweet) have endorsed anyone for the executive race.  Jay "folkbum" Bullock has come out in support of Jim Sullivan.  As for who I support, well, it's not Holloway, Griffin, Stone or Abele.

But even funnier is that Abele's staffer who tweeted this, and Sykes who blindly followed along in his anxiousness to score a point, regardless of how lame, included a tweeter using the handle @capper.  Unless I moved across the Pacific Ocean and had an ethnic crossover, @capper is most definitely not me.

Two non committed people, two in favor of Jim Sullivan, and getting our names wrong....not exactly what I would label has "his peeps."

So what facts does Sykes have that we are Abele's "peeps?"