Them bitter clingers had Christmas come early when the corrupt governor from Illinois (Rod Blagojevich-D) was arrested for being a first degree sleazeball. The righties didn't have much to celebrate until then, and were busy licking their wounds from the elections and trying to start impeachment hearings against Obama before he was even sworn in.

On of the most bitter-clinging haters was that goofball, Fred Dooley, of Real Dumbass Wisconsin.

Dooley at 1:18 pm in the afternoon, when most gainfully employed adults are at work, posted this nonsense, whining that not enough liberals were bashing Blago. Not only was he counting (though he must have problems with math problems involving two integer numbers, judging from the comment section), he was taking it upon himself to critique any posts that were written by liberal bloggers. And then he couldn't even have the decency to spell Cognitive Dissidence correctly.

This is from a guy who is so fairly unbalanced in his own blogging that his posts include:

On Larry Craig, who is still guilty of trying to solicit sex in an airport bathroom, Fred wrote this.

On David Vitter, who was on Washington Madame's list of favored shoppers, Fred wrote this.

On Christopher Thomas, a little boy who was murdered, and part of the blame falls on Alberta Darling's Bureau of Milwaukee Child Welfare, Fred compassionately wrote this.

And for the real kicker, on Michael Gableman, who, like Annette Ziegler, starts his time on the Supreme Court under a cloud of doubt, as he is trying to defend the indefensible. And Fred's take on Gableman's wrong-doings? Well, he didn't write any. Nothing. Zilch. Nada.

But not only did he not write any posts condemning Gableman for his misbehavior, nor any calling for his ouster, but the posts on his site regarding Gableman are either endorsements or defenses of the miscreant. This is not surprising. After all, there is photographic evidence that Fred likes to associate with these kinds of scofflaws: 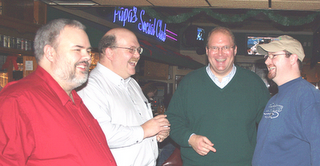 But you got to give it to Dooley on one thing. What he lacks in propriety, he makes up with chutzpah.

Mike Mathias sure appreciates him though.
Posted by capper at 12:09 AM