Kevin Fischer is all smug about his show, Interchange. He alludes to Joel McNally scoffing at his assertions that Scott McClellan is a liberal. His evidence is this link, which McClellan states he is "intrigued" by Senator Obama, and "may vote for him". Ooh, that makes him a liberal for sure, right?

Wrong.
Some real Repbulicans know a little better than Fischer: 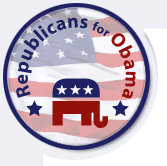